COVID-19: EMPLOYMENT FAQs—ARE MY RIGHTS BEING VIOLATED? FIND OUT HERE
Skip to content
Previous Next 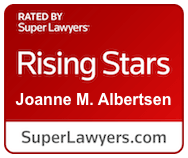 Prior to joining the firm in 2013, Joanne Albertsen clerked in the Southern District of New York for Magistrate Judge Michael H. Dolinger and in the Eastern District of New York for Magistrate Judge Marilyn D. Go. During law school, Ms. Albertsen participated in a legal clinic with the Brennan Center for Justice, advocating for the rights of language minorities in the contexts of voting rights, federal court, and law enforcement. She works closely with Pelton Graham’s New York and California offices.

Ms. Albertsen lives in Portland, Oregon with her husband, cat, and young son. She loves hiking and gardening in the beautiful Pacific Northwest and writing speculative fiction when it’s too rainy to venture outdoors.